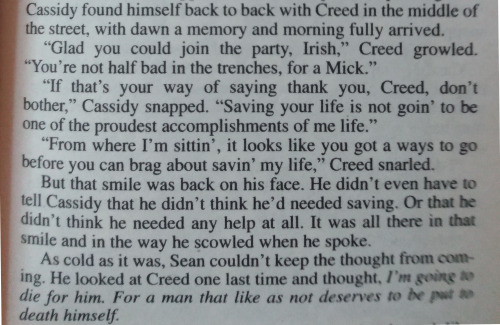 Cassidy found himself back to back with Creed in the middle of the street, with dawn a memory and morning fully arrived.

“Glad you could join the party, Irish,” Creed growled. “You’re not half bad in the trenches, for a Mick.”

“If that’s your way of saying thank you, Creed, don’t bother,” Cassidy snapped. “Saving your life is not goin’ to be one of the proudest accomplishments of me life.”

“From where I’m sittin’, it looks like you got a ways to go before you can brag about savin’ my life,” Creed snarled.

As cold as it was, Sean couldn’t keep the thought from coming. He looked at Creed one last time and thought, I’m going to die for him. For a man that like as not deserves to be put to death himself.

View all posts by admin